This post kicks off a new social media series to celebrate International Mother Language Day and generate a critical discussion around adoption-related language. Please follow us here on WordPress as well as on social media (Facebook, Instagram, and Twitter) for upcoming posts aimed at developing a lexicon pertaining to adoption from a critical point of view. 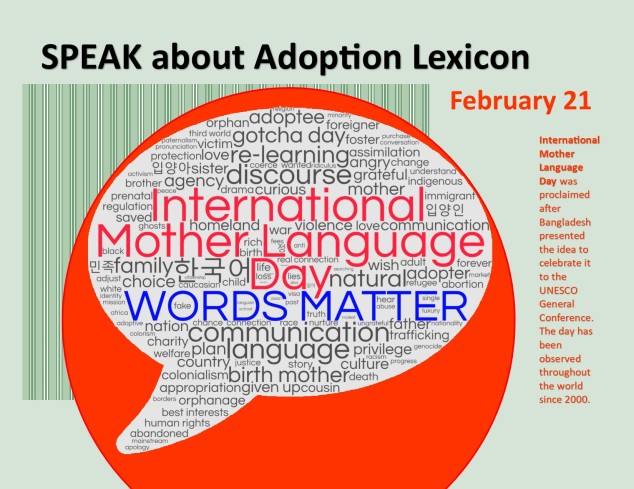 Language is a sensitive subject for many who were adopted from one nation to another. Usually they experience language loss, which often represents a culmination of language loss initiated by colonization or compelled migration in individuals. Unlike other first-generation migrants who acquire additional languages when they move with their families, individuals who are adopted by foreigners are forced to assimilate into the dominant culture of their adopters and consequently lose their mother languages. Later, language skills mark people who were adopted when they return to their native communities.

International Mother Language Day has its origins in the colonization of India by the British. When India achieved independence, the departing colonizers divided the country into Hindu India and Muslim Pakistan. Pakistan, however, consisted of Urdu-dominant West Pakistan (currently Pakistan) and Bangla-dominant East Pakistan (currently Bangladesh). When West Pakistan tried to impose Urdu onto their Bengali citizens, the Bengalis resisted, despite sharing the same Muslim faith as the West Pakistanis. Bengalis are stereotyped as romantic idealist intellectuals, but they defended their mother tongue fiercely, in some cases to the death. The name of the international commemoration, Mother Language Day, touches me, encompassing language and mother, which I immediately associate with adoption. Even the monuments honoring the language movement seem connected to adoption since they symbolize a mother surrounded by the children she lost during the struggle for their mother tongue. 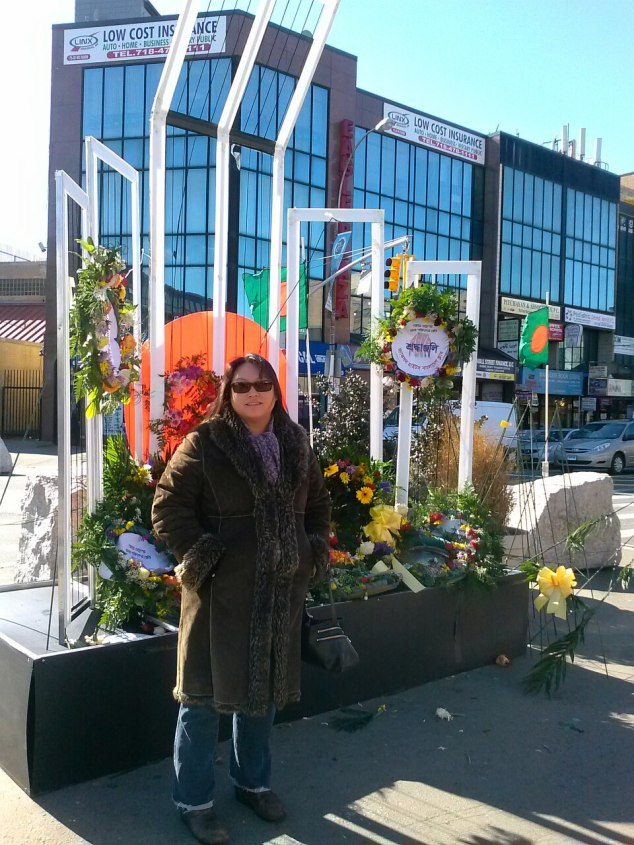 The author at a Shahid Minar Monument in the US. The Mother Language produced language martyrs, honored by Shahid Minar monuments throughout Bangladesh and in diasporic communities like this one in Jackson Heights in Queens, New York City. The Shahid Minar always has the same motif of a mother surrounded by her children represented by rectangular structures. https://en.wikipedia.org/wiki/Shaheed_Minar,_Dhaka

A placard with a drawing of a Shahid Minar monument and the phrase written in Bengali surrounded by flowers. “February 21 is the strong belief or determination to the Bengali people not to stoop the head before any injustice.” 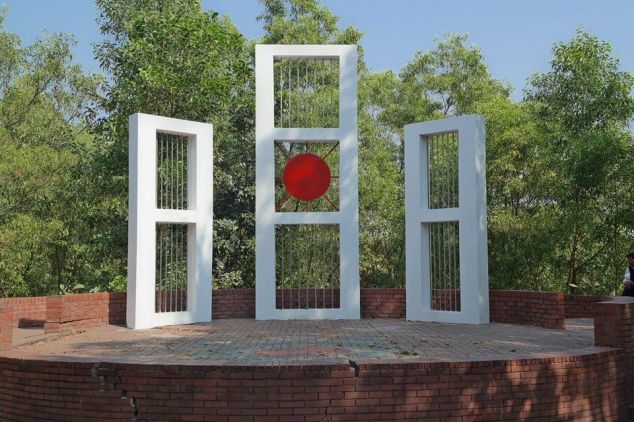 Shahid Minar on the Shahjalal University of Science & Technology Campus. A modern take on the motif, the structure symbolizes a mother surrounded by the children she lost.

There are a lot of words and phrases that are pervasive when discussing adoption, but they are often accepted and used without much thought. In my next post, I will examine the origins and contexts of some of these terms.